Hey! How's life everyone?!
Pretty good?
Great! But I bet it's not as great as mine! 'Cause I'm on a mission! Haha

So Quick news for this week:
-Maderios kyodai (one of my sensais) cut his hand pretty bad, so he can't write, so he withdrew from BYU, quit working at the MTC and is flying back to Hawaii today. That kinda stinks, but it's alright, he was acting out a dang tough investigator, and now I don't have to worry about teaching him anymore haha. Jk but kinda not..
-Robby's Here! And he's on my floor in the residence, I feel kinada bad for him though, he's in the crappy zone...most of the missionaries in his zone are slackers. One of them who's been here as long as I have, just learned how to pray this week, which we learned how to do the first day...So yah...hopefully he doesn't get to influenced by their work ethic.
-Clarissa is here too! She's in Robby's zone, along with all the other missionaries going to Nagoya!
-We got LOADS of new missionaries in with Robby's group. 48 to be exact. I don't like most of them unfortunately...they all just sit in the halls and talk. They're in for a huge rude awakening when they get to Japan and don't know anything.
-We had a rap off last night right after zone prayer. And it was pretty awesome

Alright, so since I'm leaving in a week I figured I'd reflect on what the MTC is like, and why I like it so much haha
So reason Numba 1: The MTC is like the Tower of Babel! Everyones always muttering jibberish in different languages and it's awesome!
2. Because of numba 1 you can travel the MTC and it's kinda like traveling the world! Last P-day I went on a quest to explore which languages were in each building, and pick up free language books I might want on the way, and it was awesome! Which leads to number 3
3. You can get soooo much free stuff here! I found a bunch of normally expensive stuff, just lying around from people leaving it here when they leave. Like all my awesome Portuguese books! And my Spanish, and Italian, and German books...If you know where to look you can pretty much find whatever you want here haha.
4. Unlimited food. Buffet for every meal, pretty much fantastic.
5. You can make friends from around the world here! I now have friends in China, England, Portugal, Canada, Korea, Cambodia, Australia, New Zeland, the Philippians, a few weird some/Central american countries that I can't pronounce/spell, Hawaii, all over the U.S. Japan...It's awesome I love international friends. Especially if I can buff off them when I travel their country haha jk...but kinda not..
6. I get to learn Japanese!
7. The spirit here is awesome! And we have so many opportunities to receive revelation for the rest of our mission! It's fantastic! We have Devotionals twice a week, which are huge spiritual highlights, then if your really seeking insights, and new inphormation, you can get taught so much via the spirit, through lessons, the scriptures, devotionals, talks, etc. Everything here is pretty much fantastic.

I'll end with a little spiritual insight. This week I was pondering alot on the HOW to feel the atonement's power. I already learned that I need to become truly converted myself, and know how to use it, in order to bring other people into the gospel "You cannot convert others past your own conversion." So anyways I was thinking about whether or not I had felt the atonement's power before, or if I've ever truly repented...I mean I don't have any huge sins or anything...but I wanted to really know the atonement well, like Ammon, and Aaron, etc. So anyways a 3 weeks ago elder Nelson said "True repentance is true conversion, and true conversion is true repentance" Then in last Sunday's devotional, the speaker said "True conversion, is WANTING to keep the commandments" So do some simple algebra, and you come up with "True repentance, is wanting to keep the commandments" aka if your desires have changed, then the atonement has changed you, and you have repented. So what your thoughts and desires, and become perfected in Christ. Anyways that's the insight of the day! That one was pretty big for me! I feel like I understand repentance/the atonement alot better.

Here's some pictures for ya!
1. Priesthood Power. 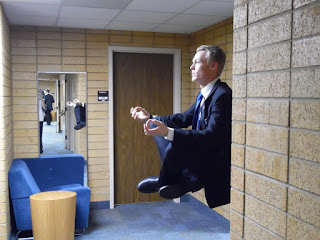 2. The Shimai in our zone! (I don't have a picture of the Elders in my zone...otherwise I'd give that too) 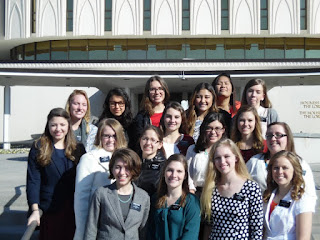 3. All my Portuguese books! 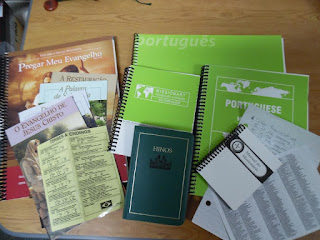